The Passage Choiseul in Paris

Located in the second district of Paris, between rue des Petits-Champs to the south and rue Saint-Augustin to the north, Passage Choiseul is the longest covered arcade in Paris (190 meters).

Built between 1825 and 1827, it consists of a series of galleries on pilasters on the the ground floor level. The latter and the mezzanine floors are mainly filled with shops while the first and second floors are more residential. Covering the arcade is a glass roof which was replaced around 1907.

In 2012, it was completely renovated. The dark descriptions of the writer Céline are no longer valid. Time had unfortunately left its mark on the glass roof which now lets in natural light; a remarkable aspect of the Passage Choiseul.
The gas lamps which exhaled an unpleasant odour have been replaced. Renovated in wood, metal and marble; the arcade is now fresh and bright.

It is listed as a historic monument and is part of the Parisian heritage. Its atypical charm attracts tourists from all over the world; some couples even organize their wedding inside this famous arcade!

The Passage Choiseul now houses all kinds of shops and restaurants, welcoming both strollers and people working in the surrounding neighborhoods.
Its proximity to the major Parisian offices, the Stock Exchange and ‘The Bouffes-Parisiens’ Theatre brings to it a continuous flow of people walking through.
The theatre also has its own exit into the arcade, bringing further life to the place since 1857.

On the whole, The Passage Choiseul generates a nice surprising effect on those who have not yet discovered it. It is a different enchanting world within the city, enabling one to get away from it all, right into the heart of Paris’ history. 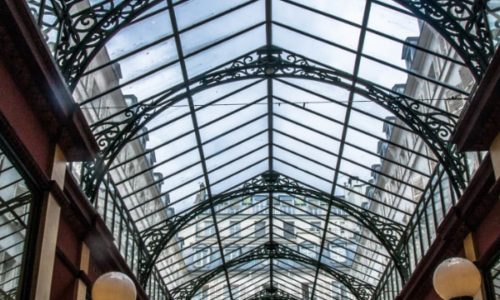